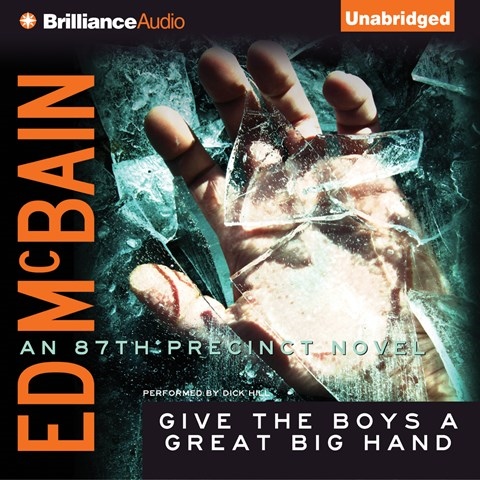 GIVE THE BOYS A GREAT BIG HAND 87th Precinct, Book 11

They feature no cell phones or iPods, but the late Ed McBain's works, which set the bar for police procedurals in the '50s and '60s, still stand the test of time—especially when narrated by Dick Hill. Hill is almost always near the top of his game, and he reads this so exuberantly that you know he's enjoying it as much as you are. The "boys" are Steve Carrella, Detective Hawes, the incomparable Meyer Meyer, and the rest of the cops of the 87th Precinct. In this installment, the boys investigate the story behind a severed hand found by a cop—with its mate discovered soon after. What follows next is some cool detective work and a lot of hilarity. Hill turns on his New York accent like nobody else, and he delivers the plentiful sarcasm with joy in his voice. A.L.H. Winner of AudioFile Earphones Award © AudioFile 2012, Portland, Maine [Published: JULY 2012]