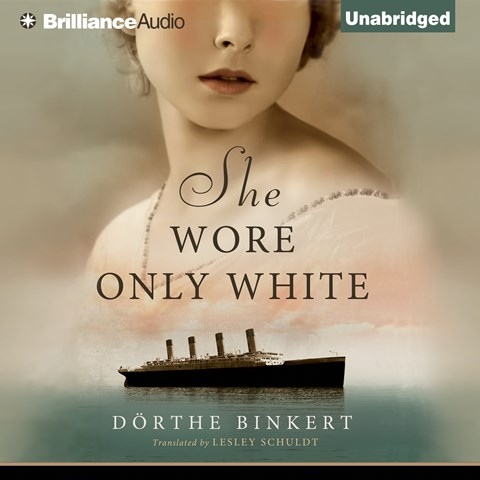 SHE WORE ONLY WHITE

Dorthe Binkert weaves an engaging tale based on a story that appeared in the NEW YORK TIMES. In 1904, a mysterious event leads Valentina to board the SS KROONLAND in Antwerp. Bound for New York City, she is clad in a white evening gown and has no luggage. As a stowaway, she is confined to a first-class stateroom during the day, appearing only at night when her apparel is appropriate. Mel Foster’s authentic narration brings the diverse cast of characters into clear focus. Foster convincingly switches accents, including French, German, Dutch, British, and American. As Valentina enchants the men on board, flashbacks and passenger narratives fill in the missing pieces. The affecting story unfolds at the deliberate pace of an oceanliner crossing, and Foster’s characterizations make it all believable. S.J.H. © AudioFile 2012, Portland, Maine [Published: JULY 2012]