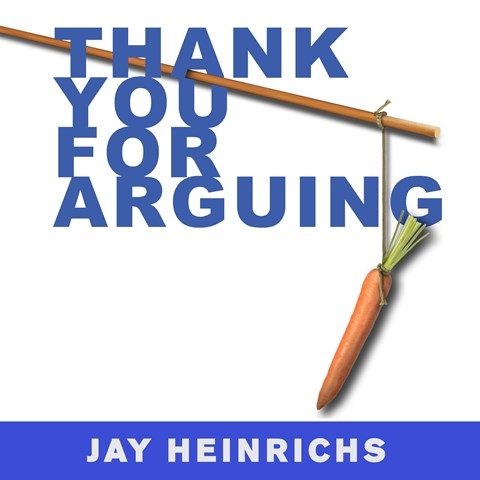 THANK YOU FOR ARGUING What Aristotle, Lincoln, and Homer Simpson Can Teach Us About the Art of Persuasion

Heinrichs’s book examines the history, theory, and practice of rhetoric, giving practical advice for its use at home and work. David Drummond has a somewhat nasal voice but is talented and facile, able to imitate well-known speakers, and his pacing is good. His voice and manner generally fit Heinrichs’s sometimes corny sense of humor. But he tends to give nearly each sentence a special emphasis that would be more fitting for something very brief and dramatic, like the catch phrase in an advertisement. In narration, that soon becomes tiresome, especially combined with this book’s sheer density of information. One eventually becomes used to the mannered delivery, but a book on rhetoric, especially, would have been better served by a reading sensitive to both material and listeners. W.M. © AudioFile 2012, Portland, Maine [Published: OCTOBER 2012]