Home»Reviews»WHO COULD THAT BE AT THIS HOUR? 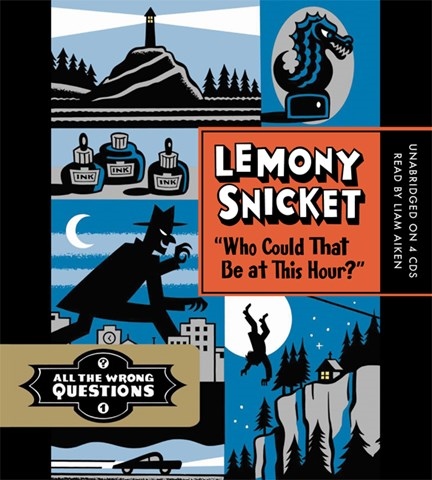 WHO COULD THAT BE AT THIS HOUR? All the Wrong Questions Series

Lemony is taken on by S. Theodora Markson as an apprentice. The duo travel in her green roadster to Stained-by-the-Sea to find the stolen Bomination, a priceless statue that is "the size of a bottle of milk." Narrator Liam Aiken skillfully tackles the challenge of myriad odd characters, unusual situations, wordplay, and subtle humor. Most fun is the verbal sparring between Lemony and S. Theodora such as, "Don't repeat what I say; you're an apprentice, not a mynah bird." Also adding to the witty chaos are Pip and Squeak, brothers and cab drivers who drive Lemony for tips—not cash but book recommendations. Listeners will not only be entertained but will also learn vocabulary in a most unusual (and memorable) way. S.G.B. © AudioFile 2012, Portland, Maine [Published: OCTOBER 2012]