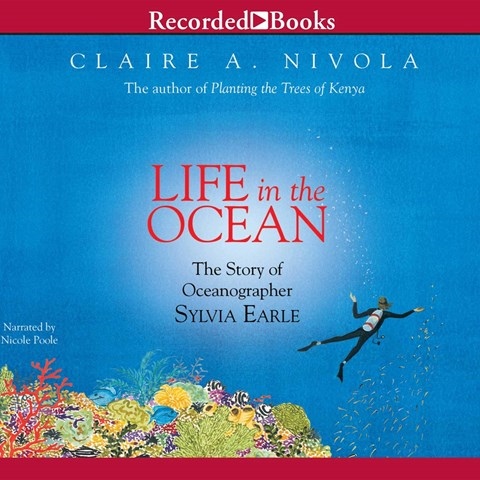 LIFE IN THE OCEAN The Story of Oceanographer Sylvia Earle

by Claire A. Nivola | Read by Nicole Poole

Nicole Poole's rich, flowing voice captures the peaceful beauty of the ocean environment and the story of how Sylvia Earle was drawn to become an oceanographer. Poole's soothing narration recounts the development of Sylvia's passion for the ocean, which began when she moved to Clearwater, Florida, at age 12. With well-timed pauses Poole emphasizes both new vocabulary and the story's environmental message; however, occasionally, her pauses are overextended, and a sentence loses continuity. Overall, she fully conveys Earle's dedication to the preservation of the ocean with a clear voice and an unrushed pace that will engage young listeners. The author's note, which discusses terms such as "biodiversity" and "acidification," is directed towards older children and adults. M.F. © AudioFile 2013, Portland, Maine [Published: APRIL 2013]