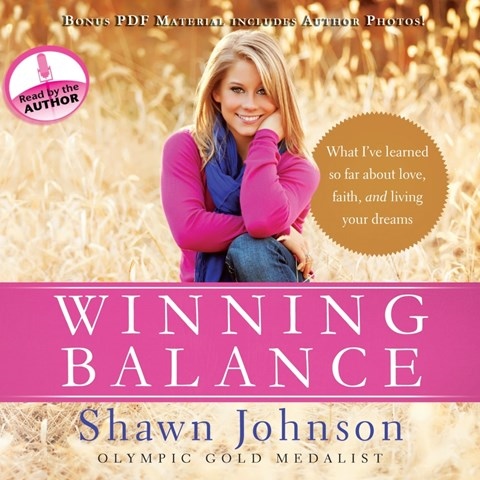 WINNING BALANCE What I've Learned So Far About Love, Faith, and Living Your Dreams

Four-time Olympic gold and silver medalist Shawn Johnson narrates her memoir with charm, vigor, and youthful eloquence. She sincerely portrays her belief that everything happens for a reason and all things happen for the good when you walk by faith. In a soft, mellow voice she characterizes herself as part "nerd, tomboy, and girlie girl." Her tone changes to one of thoughtful conviction when she describes her purpose in writing: to reflect on lessons learned. Specific examples include the disappointment of losing the gold medal in Beijing, the drama of a potentially career-ending ski injury, and the excitement of her surprise flirtation with Hollywood stardom when she won “Dancing with the Stars” in 2009. A section called "Lessons I've Learned" ends each chapter. Johnson's story and narration engage and inspire. G.D.W. © AudioFile 2012, Portland, Maine [Published: SEPTEMBER 2012]