Home»Reviews»THE PRIVATE MEMOIRS AND CONFESSIONS OF A JUSTIFIED SINNER 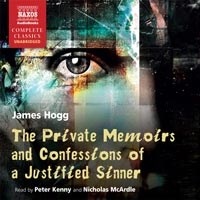 THE PRIVATE MEMOIRS AND CONFESSIONS OF A JUSTIFIED SINNER

This 1824 prototype of the psycho-killer confessional novel is eerily brought to life in a new reading by Nicholas McCardle and Peter Kenny. The book has two parts: The first is a thirdhand account of the story, read by the steady-voiced McCardle, the second is the memoirs of the possessed killer, read by the younger-voiced Kenny who embodies the main character and tells the story of his tutelage under a mysterious Satan-like entity. One would think a nearly two-hundred-year-old novel would be stylistically dated, but it sounds contemporary in both style and subject matter. The narrators’ well-paced reading and their clarity with the Scots accent make it all the more accessible to listeners today. F.T. © AudioFile 2012, Portland, Maine [Published: OCTOBER 2012]