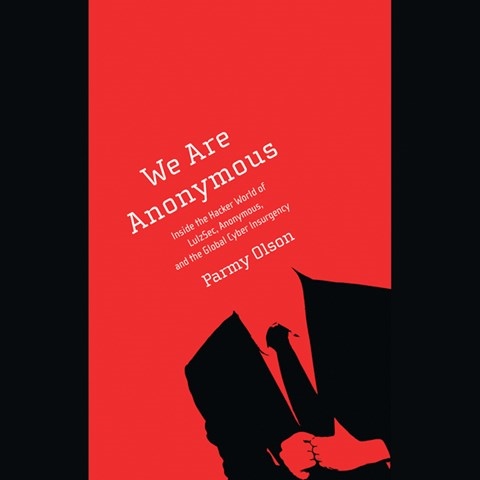 WE ARE ANONYMOUS Inside the Hacker World of LulzSec, Anonymous, and the Global Cyber Insurgency

With a conspiratorial tone and sense of urgency, narrator Abby Craden adds an extra dimension to this fascinating account of the rise and fall of a hacker collective. Craden personalizes the story and removes some of the anonymity of its principals—who are identified only by handles—by giving them voices and accents. Author Parmy Olson simplifies this complex story by using first-person interviews and by demystifying the technology and terminology, which includes such terms as “botnets” (zombie computers linked to attack sites) and “rickrolling." Olson tracks these sometimes altruistic, often cruel “hacktivists” over a decade—all the way to the 2012 arrests by the FBI. Not surprisingly, the government unmasked the defendants with research generated by an angry ex-Anon, a middle-aged mom from Michigan. R.W.S. © AudioFile 2012, Portland, Maine [Published: AUGUST 2012]