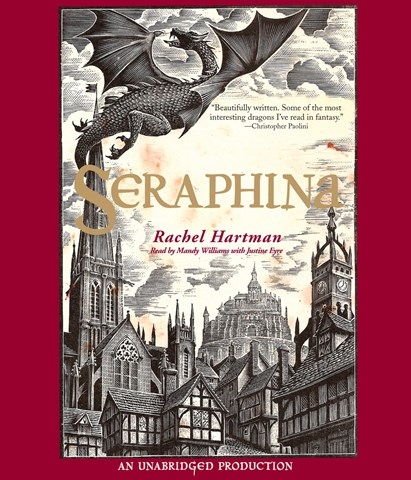 After 40 years of peace between the kingdoms of Goredd and Dragonkind, there’s a threat from pro-war factions on each side. Sixteen-year-old musical prodigy Seraphina hides a dark, potentially deadly secret. She’s plagued by her mother’s visions, by strange creatures inhabiting her mental “garden,” and by her growing affection for a betrothed prince. Mandy Williams narrates Rachel Hartman’s original coming-of-age story with a girl’s ingenuous enthusiasm while Justine Eyre provides the maternal memories with the rueful tone of one who has ignored a taboo. Hartman’s tale is chock-full of unique landscapes, ancient saints, dragon lore, music, and politics. Williams creates a charming new heroine, and Hartman’s clever symbolism and artful allusions assure fantasy fans of something fresh and unusual. S.J.H. © AudioFile 2012, Portland, Maine [Published: JULY 2012]