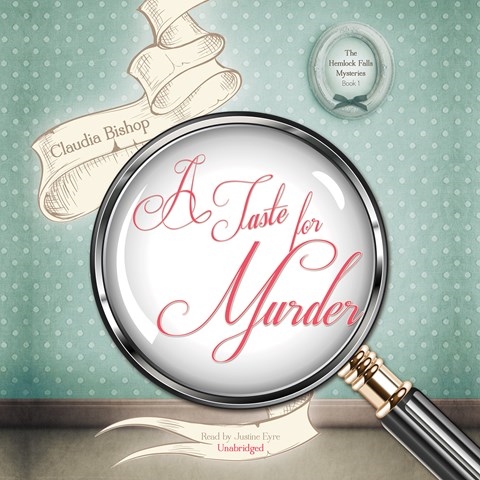 A TASTE FOR MURDER

There's a sense of anticipation long before a body is found in Claudia Bishop's new Hemlock Falls mystery. Dialogue early in the story turns to poisoning and an old tale of a witch being crushed to death. Narrator Justine Eyre lets Bishop's hints at the nastiness to come sink in. At the same time, her narrating voice sounds like that of a local busybody who is letting listeners in on the secrets of Hemlock Falls. At times, the mystery seems to run second to innkeeper Sarah Quilliam's frustration in dealing with her chef sister and her difficult guests. Many of the hassles play a part in the mystery, though. A recipe at the end helps fulfill the title's promise. J.A.S. © AudioFile 2012, Portland, Maine [Published: NOVEMBER 2012]