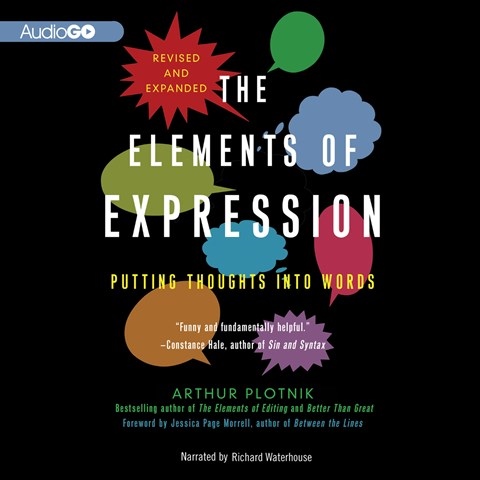 THE ELEMENTS OF EXPRESSION 2nd Edition; Revised and Expanded; Putting Thoughts into Words

As a narrator, Richard Waterhouse meets the challenge of narrating a book about a topic many consider to be utterly boring: grammar. He does admirably well with Plotnik’s writing, charts, and lists, trying to infuse them with personality and energy as much as possible. It’s not so much that Plotnik’s writing is not up to par but that but explaining grammar in any format is not easy. Plotnik’s insights about language early in the book guide the listener while his later chapters about word usage are less engaging. Waterhouse’s use of emphasis helps make most things clear, but the helpful charts are lost in the transition to audio. L.E. © AudioFile 2012, Portland, Maine [Published: SEPTEMBER 2012]