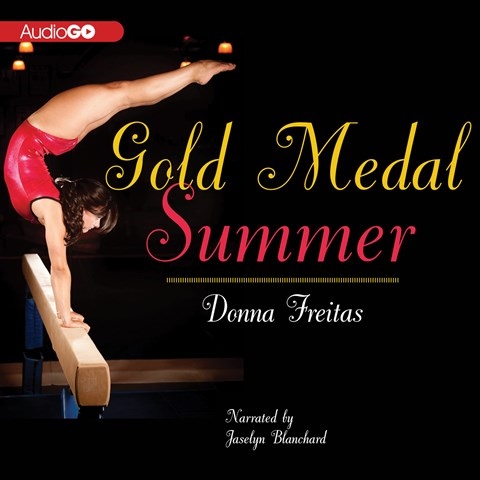 Fourteen-year-old Joey Jordan has dreamed of winning gold since she started gymnastics in the second grade. Her older sister won the gold at Nationals before surprising everyone and retiring from the sport. Joey’s dream is to surpass that record and go all the way to the Olympics. Narrator Jaselyn Blanchard sounds like an enthusiastic 14-year-old girl, right down to the raised inflection that turns most of her sentences into questions. But Blanchard can’t overcome the weakness of one-dimensional characters and a story that lets the glow of first love outshine the glimmer of Olympic gold. Girls interested in gymnastics will be disappointed at how quickly a sports story with a driven female athlete devolves into a run-of-the-mill romance. N.E.M. © AudioFile 2012, Portland, Maine [Published: OCTOBER 2012]