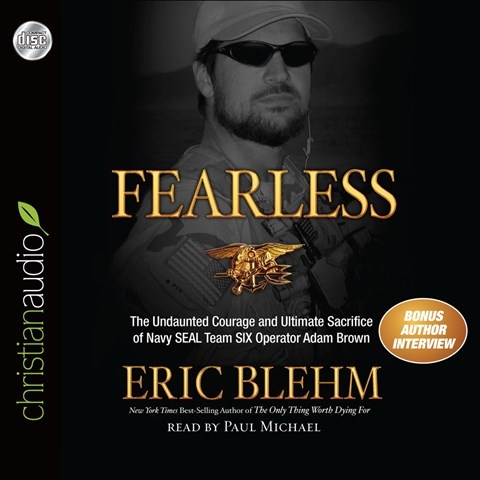 In a measured and deliberate reading, Paul Michael recounts the story of Navy SEAL Adam Brown, who was killed in action in August 2010 in Afghanistan. Blehm, whose previous work, THE ONLY THING WORTH DYING FOR‚ describes the Green Berets in action at the beginning of the Afghan campaign in 2001, was able to interview Brown’s family and friends and gain access to the very closed circle of SEAL operators to tell this remarkable story. Brown, a troubled but talented and fearless kid from Arkansas, evolved into quite a different man after he became an evangelical Christian and then a respected SEAL. Michael’s resonant baritone and Midwestern twang suit the text well. M.T.F. 2013 Audies Winner © AudioFile 2012, Portland, Maine [Published: JULY 2012]