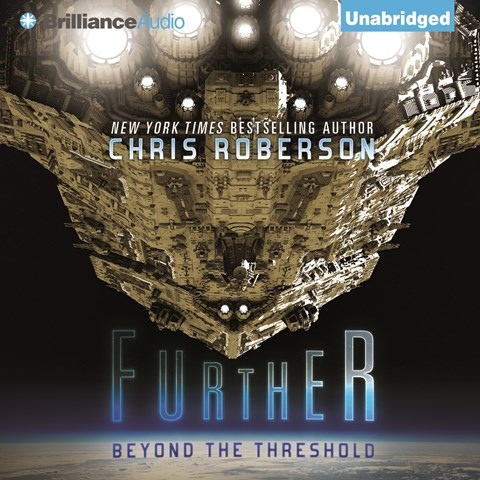 FURTHER: BEYOND THE THRESHOLD

There are more imaginative creatures and fascinating concepts in this one book than in a series of science fiction works by lesser lights. Author Chris Roberson's hero is an Indian astronaut named RJ (Ramachandra) Stone who wakes up 12,000 years in the future, when humanity has spread throughout the galaxy and advanced to include hundreds of new species. Narrator Jeff Crawford allows foot-long unpronounceable alien names to roll off his tongue. His unflappable demeanor and ability to give voice and character to sentient dogs, whales, chimps, and even sexless semi-robotic creatures aid listeners in keeping the dozens of unique characters straight. Crawford also helps make Roberson's exposition on even the most bizarre future science sound plausible. More than that, listeners will want to live in this world. M.S. Winner of AudioFile Earphones Award © AudioFile 2012, Portland, Maine [Published: JULY 2012]