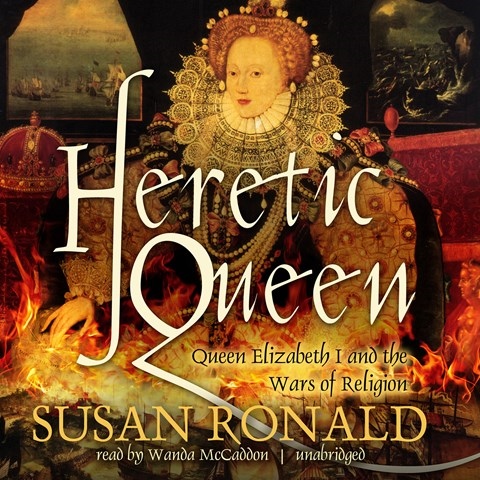 HERETIC QUEEN Queen Elizabeth I and the Wars of Religion

The reigns of Henry VIII of England and his progeny are perhaps most notable for their repeated upheaval of the religious structure of the country and its inhabitants. By the time Elizabeth I reached the throne, England had broken with the Pope and been subjected to both radical Protestantism and Catholicism that included the Inquisition and its associated burnings. Ronald’s HERETIC QUEEN, narrated by Wanda McCaddon, describes Elizabeth’s often tumultuous rule in a nation divided and in a Europe frequently at war over religion. Although Elizabeth’s story is an intense one, Ronald and McCaddon are not consistent in keeping the innate drama of HERETIC QUEEN at the forefront, occasionally losing the listener in some of the minutia of the history. J.L.K. © AudioFile 2012, Portland, Maine [Published: NOVEMBER 2012]