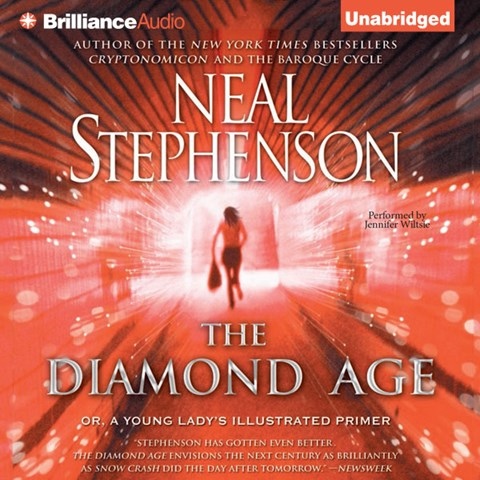 This reissue of Jennifer Wiltsie's outstanding 2001 narration is a welcome gem. Stephenson's story, while at first disorientingly confusing, is made accessible with Wiltsie's clear and thoughtful reading. A young waif in a futuristic society acquires a nanotechnological storybook that interacts with her, providing guidance and training that will ultimately make her into a world-transforming leader. Wiltsie delivers most of the novel with an American accent. But Witsie takes on English accents with appropriate refinement when speaking from the point of view of the Book, its neo-Victorian designer, and the girl as she develops into a young woman. One disappointment is that sections of the recording seem to have been taken from inferior digital copies, giving the production a shallow, tinny quality. S.E.S. © AudioFile 2013, Portland, Maine [Published: APRIL 2013]