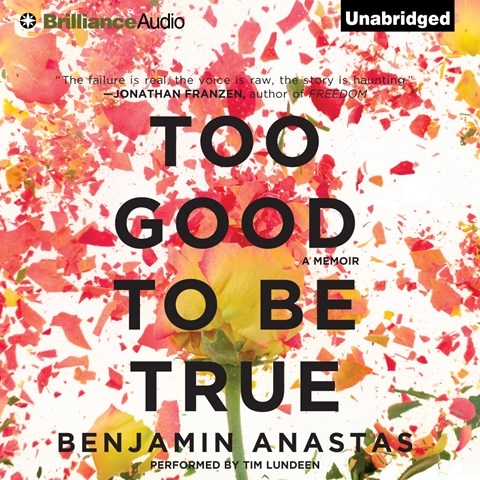 TOO GOOD TO BE TRUE

Life was looking good for Benjamin Anastas. He was a rising star in the literary world, with a promising first novel, and was engaged to be married to the woman he loved. Everything starts to fall apart when he cheats on his fiancée, his literary career tanks, he faces financial ruin so dire he resorts to scraping together change to pay for groceries, and after he gets married, his wife leaves him for another man while pregnant with Anastas’s son. Tim Lundeen narrates this litany of woes with precise enunciation. He captures the vitriol Anastas feels for the man his ex-wife left him for, and it’s not pretty. Lundeen excels in communicating the author’s love for his son, particularly in a letter to the boy that is presented at the end of the work. S.E.G. © AudioFile 2012, Portland, Maine [Published: DECEMBER 2012]