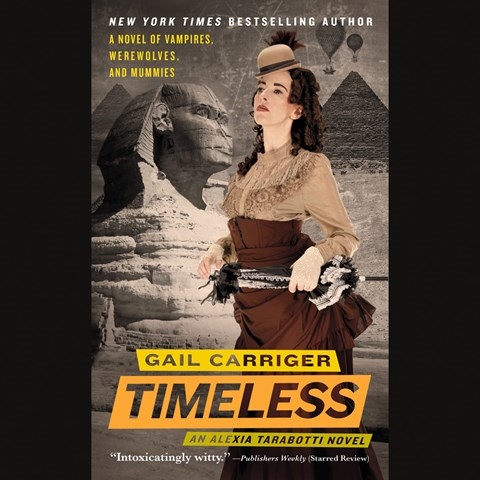 Emily Gray’s performance makes Carriger’s fifth steampunk/paranormal romance another romp through vampire and werewolf country. With SOULLESS, CHANGELESS, BLAMELESS, and HEARTLESS behind her, Alexia Tarabotti, aka Lady Maccon, who was born without a soul, is enjoying her hard-won domestic tranquility. A command from the oldest “living” vampire queen sends Alexia’s unusual extended family to Egypt to investigate some suspect clockwork intricacies and something called the “God-Breaker Plague.” Shrieks, sighs, and melodrama dominate. With charming silliness, Gray enlivens the undead, unearths ancient Egyptian vampires, and animates an alternate, highly original version of Victorian England. Start with Gray’s impeccable narration of SOULLESS and immerse yourself into Carriger’s witty world of Alexia Tarabotti and the Parasol Protectorate. S.J.H. © AudioFile 2012, Portland, Maine [Published: SEPTEMBER 2012]