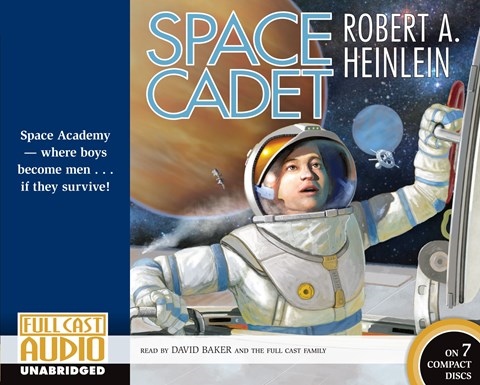 by Robert Heinlein | Read by David Baker and a Full Cast

From 1947 through 1958, Heinlein wrote a baker’s dozen of young adult science fiction novels of the finest quality, accurate in the science of the day, with vivid characters (including the aliens) and a near-future slant. A general theme throughout: A young fellow enlists, survives training, and becomes a man. The cast, particularly Matt‚ the lead character, carries the story with great verisimilitude. Co-cadet Tex, for example, is a big guy from Texas who sounds both big and Texan. Officers sound authoritative, and the voices of dropouts have a whiny edge. Snippets of music punctuate the chapters; the whole thing is a masterful job all around. D.R.W. © AudioFile 2012, Portland, Maine [Published: OCTOBER 2012]