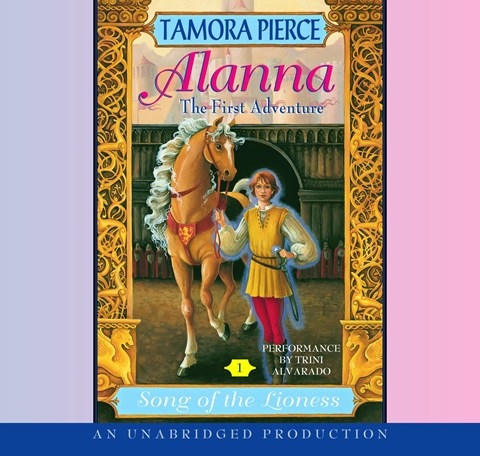 The twins Thom and Alanna of Trebond are poised to leave their father for the training due young adults: Thom to the palace to learn the ways of a knight and Alanna to the convent to learn the skills of healing and sorcery. But in the opening scene, the destinations are switched, and Alanna, disguised as her brother, sets off on the path she has long desired. Trini Alvarado is skillful in maintaining the tension in this girl-disguised-as-boy medieval fantasy. She lightly and eagerly moves the adventure along. There is an urgency to her voice --as Alanna, the headstrong and determined Alan of Trebond, learns the skills of a knight and the power of her own magical gift; as Coram, Alanna's gruff travelmate and confidant; and as Jonathan, the prince in need of Alanna's magic and healing. The listener is absorbed and eager as Alvarado navigates the travails of Alanna's many lessons, fraught with intrigue and laced with magical forces. This first book in the Song of the Lioness Quartet makes for fast-paced and dynamic listening. A.R. © AudioFile 2001, Portland, Maine [Published: APR/MAY 01]