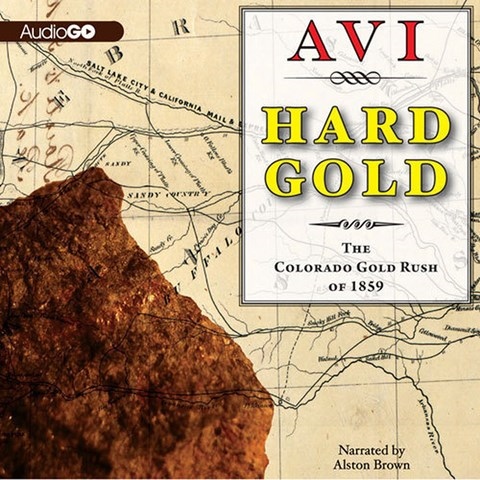 HARD GOLD The Colorado Gold Rush of 1859: A Tale of the Old West

by Avi | Read by Alston Brown

Alston Brown’s easy pace is well suited to descriptions of boundless opportunities and the wide-open prairie. Brown is the personification of innocence and naivete as he describes this book’s romantic visions of Colorado gold. The story is told by 14-year-old Early Whitcomb. Brown subtly differentiates between characters, allowing Early’s earnestness and Uncle Jesse’s charisma to distinguish them. After Jesse goes in search of enough gold to save the family farm, Early follows and faces romance, danger, and even death. As Early’s wagon train trudges west, the certainty of success fades, and tragedies abound. Despite everything, Early and his new friends maintain a positive outlook, which is further brightened by Brown’s sunny delivery. A.M.P. © AudioFile 2013, Portland, Maine [Published: JANUARY 2013]