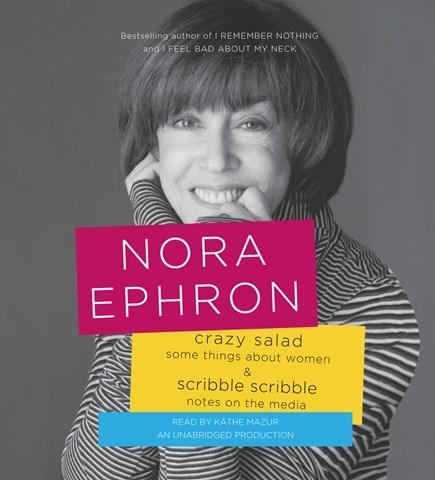 CRAZY SALAD and SCRIBBLE, SCRIBBLE Some Things About Women and Notes on Media

Screenwriter, novelist, playwright, and journalist Nora Ephron died last year. She is missed. Two of her most notable collections are a welcome addition to audio. Kathe Mazur captures Ephron’s wry humor, biting wit, and clear-eyed look at the world between 1972-74. In the CRAZY SALAD selection “Miami,” Ephron reveals shocking rivalries among feminists and betrayals by the McGovern camp at the Miami convention. “A Few Words About Breasts,” possibly her most famous piece, explores the miseries of being a flat-chested teenaged girl. “Baking Off” is her hilarious take on the Pillsbury Bake-Off. She is fearless in taking on the media in SCRIBBLE, SCRIBBLE, handling “People Magazine,” “Bob Haldeman and CBS,” and many more with her signature irreverent humor. Mazur’s narration makes these terrific essays resonate. S.J.H. © AudioFile 2013, Portland, Maine [Published: AUGUST 2013]