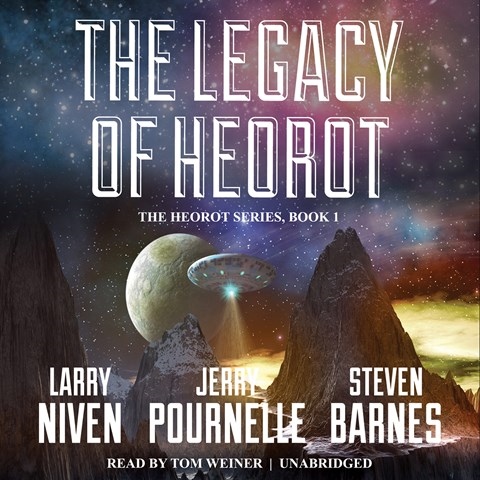 THE LEGACY OF HEOROT

Tom Weiner gives a splendid narration of this futuristic story in which a colony of humans makes a century-long space journey in suspended animation to the seemingly pristine planet of Avalon. Upon arrival they discover that the slumber has a side effect: impaired mental abilities of varying degrees. Some of them will never wake up. They also discover that there’s a species called Grendel (there are more than a few BEOWULF references in this work) on Avalon that finds their livestock, dogs, and even the humans themselves to be delicacies. Weiner adroitly relates the suspense of the story as most of the humans gradually, and quite painfully, realize that they’re in a war to the death with the Grendels. He adroitly gives each of the characters individual voices and makes this a wonderful listening experience. M.T.F. © AudioFile 2013, Portland, Maine [Published: MAY 2013]