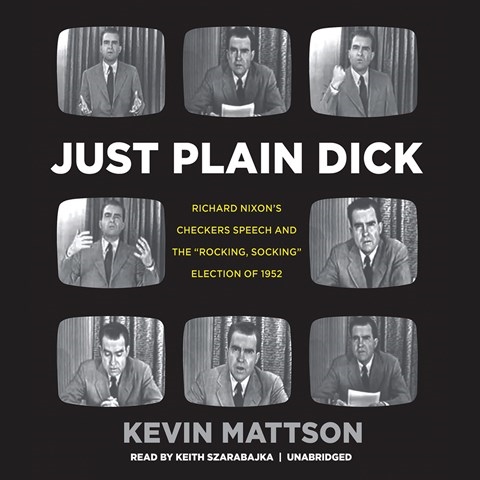 This audiobook provides a detailed chronology of the Eisenhower vs. Stevenson presidential election of 1952, the first one to be broadcast in great depth by that new medium, at the time, television. Keith Szarabajka’s tone, speed, and inflection offer excellent spot-on character portrayals, first and foremost of the often imitated Republican vice presidential candidate, Richard Nixon. Mattson argues, reasonably effectively, that Nixon’s national paid television broadcast denying illegal benefit from campaign contributors, commonly known as the “Checkers speech,” was the turning point for Nixon’s defense of his position on the Republican ticket. While the appeal of this book will be primarily for political buffs and historians, Szarabajka, by adjusting his volume and intensity in just the right places, provides a fascinating story that highlights Nixon’s intelligence, strategic thinking, and paranoia. W.A.G. © AudioFile 2012, Portland, Maine [Published: NOVEMBER 2012]