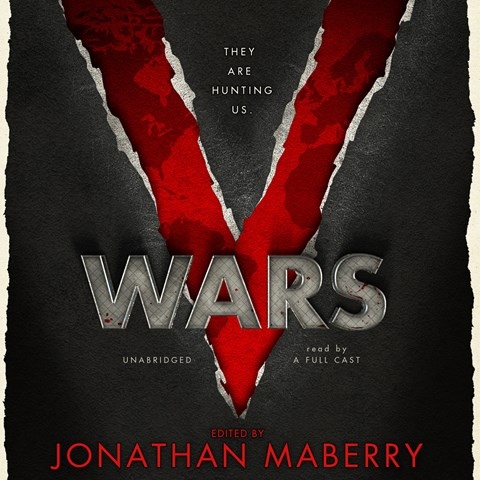 V WARS A Chronicle of the Vampire Wars

It’s the near future, maybe the day after tomorrow, and the melting ice sheets of Antarctica have released an ancient virus that attacks human DNA, turning average people into blood-craving vampires. Stefan Rudnicki, Gabrielle de Cuir, and Wil Wheaton lead a team of eight first-rate narrators who read eight interwoven novella-length tales by eight award-winning science fiction/horror writers that focus on the first days of the vampire epidemic. The narrators all use a journalistic matter-of-fact style that gives their voices and characters an immediate, realistic sound that suggests that ANYBODY could be infected and that those who are, naturally, would try to hide it and blend back into society. It’s all pulled off so well that listeners may want to check in their own mirrors to see if they’ve grown fangs. B.P. Winner of AudioFile Earphones Award © AudioFile 2012, Portland, Maine [Published: OCTOBER 2012]