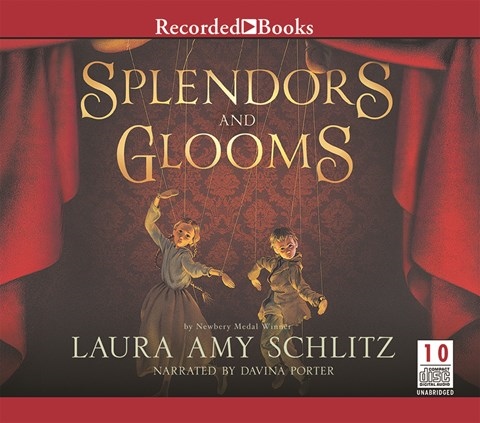 In a spellbinding drama that sweeps across Victorian England from London to the wintry mansion at Strachan’s Ghyll, Laura Amy Schlitz brings the despair, joy, and rich plotlines of a Dickensian novel to young listeners. Her cast interweaves the lives of standout characters: a witch with a powerful orb, a magician with a penchant for puppetry and pickpocketing, two plucky orphans, and one desperately lonely, well-to-do child who is transformed, at times, into a puppet. Each one has a past, a spell, or strings to shed. Such a grand story merits a special narrator—one with a studied understanding of each character and the vocal flexibility to bring the drama to life. Davina Porter, with her seasoned talent and gentle British accent, does author Schlitz proud. Poignant examples are puppet Clara’s moments of trailing off into wistful reverie, witch Cassandra Sagredo’s harsh railing against her lot, and orphan Lizzie Rose’s moments of plucky soldiering on. A.R. Winner of AudioFile Earphones Award, 2013 Audies Finalist © AudioFile 2012, Portland, Maine [Published: NOVEMBER 2012]