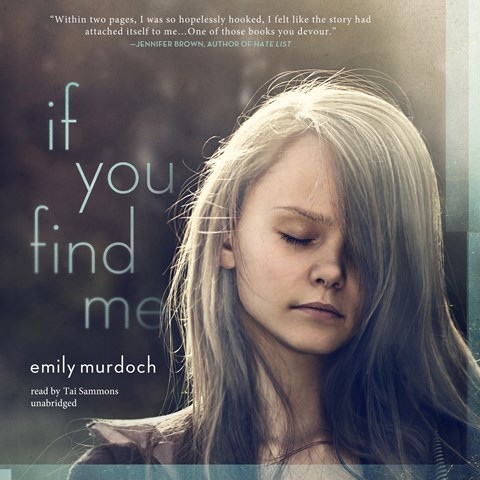 IF YOU FIND ME

Tai Sammons’s portrayal of Carrie Blackburn is shaded with a Southern accent and edged with roughness. Sixteen-year-old Carrie has spent 12 years living in the backwoods of Tennessee with her abusive meth-head mother, who kidnapped her. Sammons’s narration calls attention to the author’s fresh imagery and conveys a convincing portrait of a brave teen who has raised her 6-year-old sister and now suddenly finds herself being thrown into the middle-class world of malls and high school. Sammons’s delineation of minor characters adds tension and texture as she gives strong portrayals of Carrie’s welcoming stepmother and her angry, displaced stepsister. Carrie’s haunting memories of a terrible incident are revealed only at the story’s end. S.W. © AudioFile 2013, Portland, Maine [Published: MAY 2013]