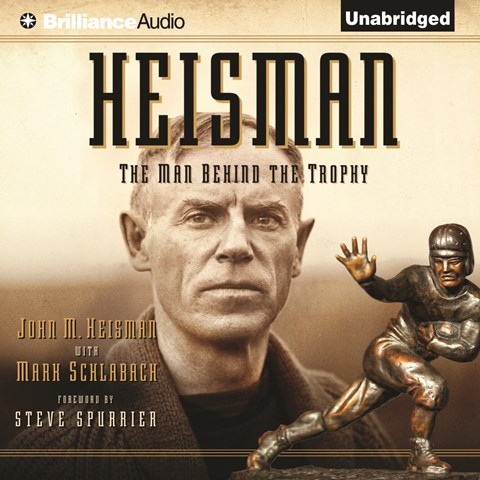 HEISMAN The Man Behind the Trophy

John William Heisman, the man whose name graces the renowned trophy, left his mark on college football both as a coach and a sports writer. Listeners will soon realize that his story reveals a lot about the game's formative years. Mark Boyd's narration sparkles as he recounts old-time signals and how they worked or the details of a tough practice under Coach Heisman. Throughout, Boyd makes the most of a fascinating subject, whether talking about disputed games, the much valued coach's contracts, or Heisman's sideline as an actor. As his descendant traces Heisman's coaching career from Ohio's Oberlin College to Rice University, listeners will come to appreciate both the man and his beloved sport. J.A.S. © AudioFile 2013, Portland, Maine [Published: JANUARY 2013]