Home»Reviews»STINK AND THE FREAKY FROG FREAKOUT 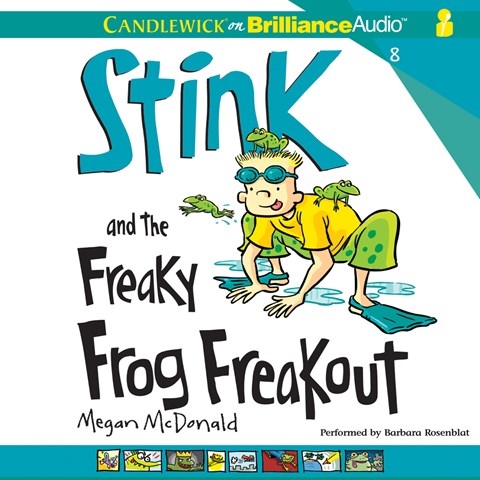 When young listeners start experimenting with croaking sounds, you'll know that this has been the audiobook of the moment. In this latest adventure, Stink faces his fear of swimming underwater, discovers a mutant frog, participates in the First Annual Frog Neck Lake Frog Count, and creates Amazing Frog-Boy comics, all with signature Judy Moody and Stink humor. Barbara Rosenblat narrates with gusto and nuance. Each character is distinctive--from a spot-on teenage guide at the Nature Center to an ever-ready-to-needle older sister, Judy. Stink changes emotion along the spectrum from insecurity to elation. Rosenblat elongates phrases to emphasize alliteration, speeds and slows and goes almost breathless to create dramatic effect, and uses staccato for emphasis. Frog sound effects and fanfares to set off Stink's comics complete the production. A.R. 2014 Audies Finalist © AudioFile 2014, Portland, Maine [Published: MARCH 2014]