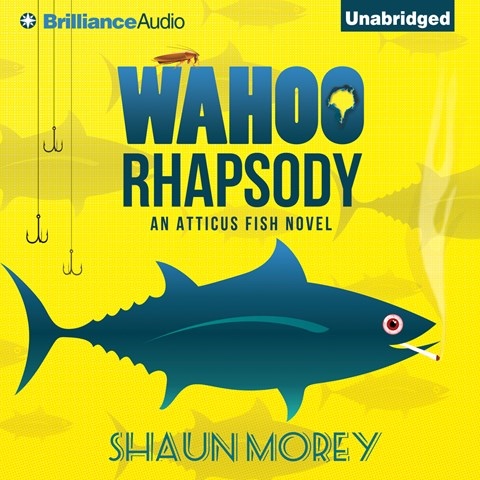 When does a narration become a performance? When Luke Daniels lets it rip in this quirky tale of eccentric good guys, devious lawyers, and downright nasty smugglers. The cast of colorful characters is an actor's dream, and Daniels throws himself into each characterization with gusto. Unbeknownst to its captain, the fishing vessel Wahoo Rhapsody is being used to smuggle drugs. But when first mate Weevil decides to steal from drug lord La Cucaracha, he sparks a chain of events that find him quickly out of his depth. Enter Atticus Fish, a retired lawyer who is hiding from all organized religions after his successful lawsuit against God. Fish and the Wahoo's captain join forces to save the day. This is the first in a series featuring Atticus Fish and will appeal to fans of Carl Hiaasen. C.A.T. Winner of AudioFile Earphones Award © AudioFile 2013, Portland, Maine [Published: MAY 2013]