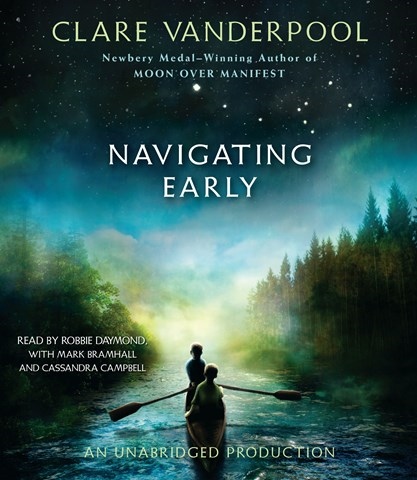 The triple narration of this novel by Newbery Medalist Vanderpool is stunning. When Kansas native Jack Baker finds himself at a Maine boarding school after his mother’s death, everything is new yet full of connections to his former life. A new friendship with student Early Auden sweeps Jack into a mathematical journey and a quest in the Maine wilderness. Robbie Daymond’s voice is as raw as Jack’s feelings of loss. He trails off and leaves unsettling pauses as Jack questions his surroundings yet provides a firm tone as Jack navigates both physical dangers and new relationships. Daymond gives Early all the awkward bluntness one would expect from “that strangest of boys.” Narrators Cassandra Campbell and Mark Bramhall provide portrayals of the story’s many other memorable characters—ruffians, a reclusive woodsman, a military father, an ancient woman, and an older brother, presumed lost. A.R. © AudioFile 2013, Portland, Maine [Published: FEBRUARY 2013]