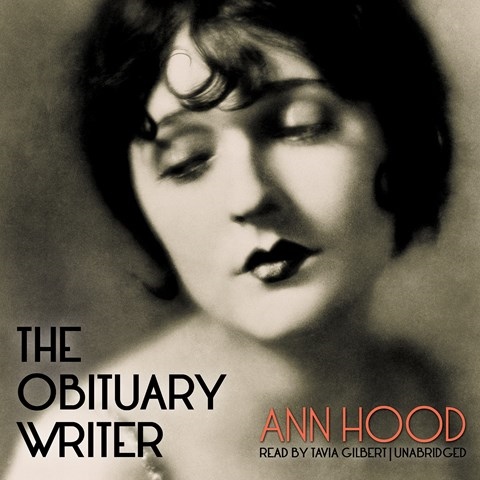 Two women from different times and opposite ends of the country are brought together in Hood's remarkable novel. Vivian—the obituary writer—is in San Francisco during and after the 1906 earthquake. Claire lives in Virginia during the Kennedy campaign and inauguration. Narrator Tavia Gilbert captures each character to perfection: Vivian sounds strong and independent yet vulnerable; Claire, the 1960s wife and mother, sounds confused as she tries to decide whether to leave her verbally abusive husband; Birdie has a quivering voice that suggests her advanced age; and Lottie sounds like the grieving mother she is. Gilbert’s portrayal of Sebastian is especially strong; his gorgeous voice and heavy Italian accent fit his masculine yet compassionate character. Even the most minor character attains distinction through Gilbert's thoughtful narration. S.G.B. Winner of AudioFile Earphones Award © AudioFile 2013, Portland, Maine [Published: MAY 2013]