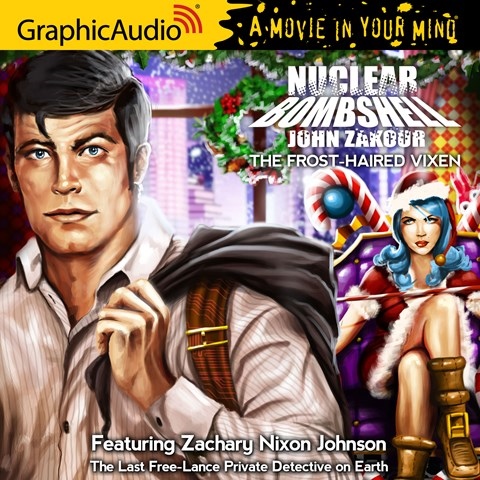 by John Zakour, Lawrence Ganem | Read by Richard Rohan and a Full Cast

One part noir, one part science fiction, and one part comedy mixed with equal parts full cast, sound effects, and musical score produces an explosively entertaining audiobook. The world's last detective, Zack Johnson, along with his artificially intelligent sidekick, Harv, has been sent to the North Pole to determine who has been killing Santanna's elves--but nobody is happy with the investigation, and people keep trying to kill them. GraphicAudio delivers another well-balanced aural experience for listeners with Richard Rohan perfectly capturing the sarcastic, charming Johnson. A host of well-chosen actors portrays the other zany characters. The production's music and sound effects blend seamlessly with the narrative, elevating this production to a level well beyond that of the average audiobook. L.E. © AudioFile 2013, Portland, Maine [Published: MARCH 2013]