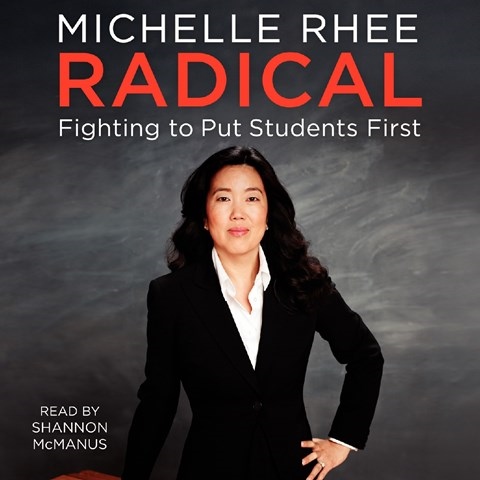 The author, the former chancellor of schools in Washington, DC, and the current CEO of StudentsFirst, is a controversial figure in the American educational reform movement because of her focus on using test scores to measure success and limiting the power of teachers' unions. Narrator Shannon McManus has a lively, animated voice that gives the memoir an energetic lift as Rhee's outlines experiences as an educator and how they shaped her educational philosophy. McManus sounds interested in the subject, and her pacing moves the events along without overwhelming listeners with the facts or figures. She changes her voice slightly to denote different speakers, though she stays away from overt characters. There are times when she reads a little fast, but she's always clear and easy to follow. R.I.G. © AudioFile 2013, Portland, Maine [Published: APRIL 2013]