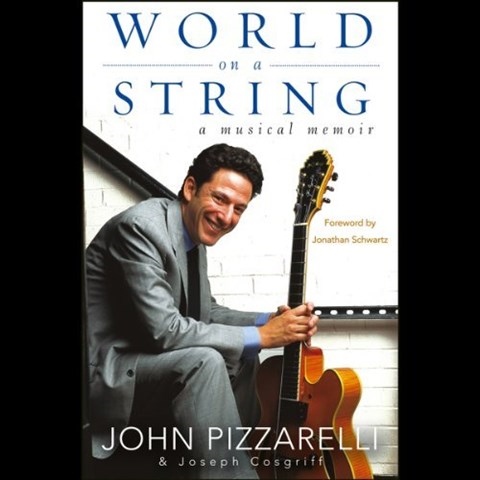 WORLD ON A STRING A Musical Memoir

This look at the life of jazz guitarist John Pizzarelli begins with an introduction written and voiced by the imperious Sirius/XM Radio deejay Jonathan Schwartz. The bulk of the work is narrated by Pizzarelli himself, who offers a candid, if pedestrian, examination of his life. He grew up the son of another famous guitarist, Bucky Pizzarelli, a member of “The Tonight Show” band. There are behind-the-scenes insights of Frank Sinatra, Rosemary Clooney, Zoot Sims, and scores of others. Pizzarelli’s narration is not as warm and charming as the more extemporaneous style of his syndicated weekly radio show, which he cohosts with his wife, singer Jessica Molaskey. Her brief narration is the most effective voice in the audiobook. Charming guitar riffs also spice up the production. A handful of editing problems interrupts the narrative, which make this production appear to be a rushed release. W.A.G. 2014 Audies Finalist © AudioFile 2013, Portland, Maine [Published: MARCH 2013]