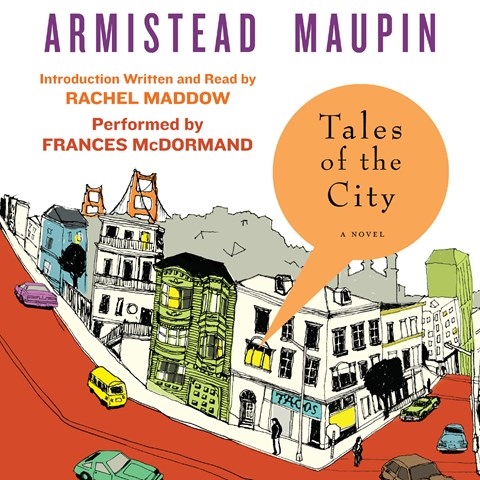 TALES OF THE CITY

With an introduction by the fabulous Rachel Maddow and a narration by the incomparable Frances McDormand, listeners can settle into a time capsule journey to the ‘70s via Armistead Maupin’s TALES OF THE CITY. Yes, it’s dated. But so what? The period is expertly rendered by McDormand’s breathing wit, marijuana smoke, and indisputable life into Maupin’s charming collection of outlandish eccentrics living and thriving at 28 Barbary Lane in San Francisco’s Russian Hill district. Begun as a newspaper serial, very like Alexander McCall Smith’s Scotland Road series, Maupin’s book adds a distinctly American sparkle to life in the big city. McDormand is wonderfully green as Midwesterner Mary Ann awakens to her new world and its denizens—from her pot-smoking landlady, Mrs. Madrigal, to supermarket singles’ nights. Delicious listening. S.J.H. Winner of AudioFile Earphones Award © AudioFile 2013, Portland, Maine [Published: APRIL 2013]