Home»Reviews»MIDDLE SCHOOL: MY BROTHER IS A BIG, FAT LIAR 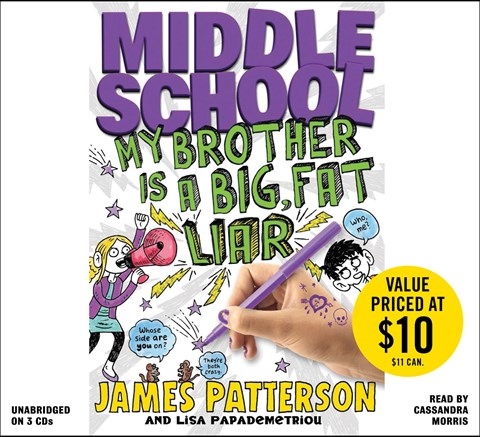 MIDDLE SCHOOL: MY BROTHER IS A BIG, FAT LIAR

Narrator Cassandra Morris hits the mark with a trifecta of exuberance, innocence, and sarcasm in the third book in Patterson's Middle School series. Her pacing mirrors the drama of middle school--always changing and never boring. As the main character, Georgia, Morris captures the cadences of youth with ease and believability. Georgia is starting sixth grade in the shadow of her infamous older brother. Being Rafe Khatchadorian's little sister is about the worst thing ever. Like her brother's earlier story, this one comes with revenge, pranks, and jockeying for social position. Unlike her brother, Georgia has a physical abnormality. It isn't central to the story but certainly adds to it. A.M.P. © AudioFile 2013, Portland, Maine [Published: APRIL 2013]