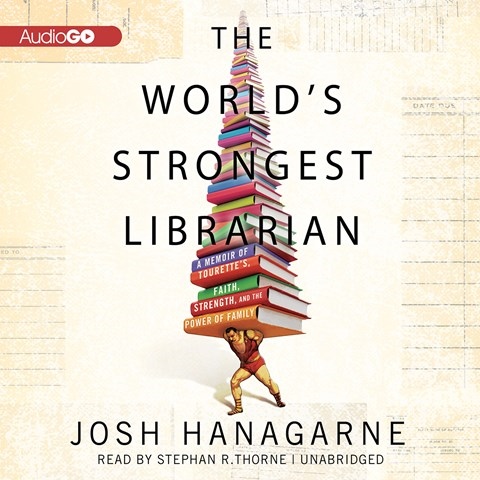 THE WORLD'S STRONGEST LIBRARIAN A Memoir of Tourette's, Faith, Strength, and the Power of Family

Salt Lake City librarian Josh Hanagarne's severe tics first appeared on stage in a school play when he was 6. Stephen R. Thorne's reading of that moment sounds much as it might have sounded to the young Josh. Portraying the adult Hanagarne, Thorne's voice ranges from elegant as he discusses the author's everyday clashes with library patrons to concerned as Hanagarne wonders if his son may one day have the same tics that he has. Throughout, Thorne reflects Hanagarne's droll wit--a coping mechanism for his Tourette's syndrome and life in general. With his optimistic and irreverent attitude, Hanagarne's experiences may be interesting to Tourette's sufferers and to others dealing with difficult personal problems. J.A.S. © AudioFile 2013, Portland, Maine [Published: JULY 2013]