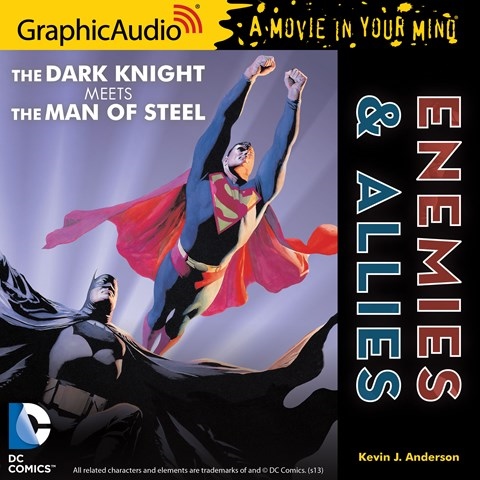 ENEMIES & ALLIES The Dark Knight Meets the Man of Steel

by Kevin J. Anderson | Read by a Full Cast

Now that DC Comics has hit the "reset" button and established that Superman and Batman came into existence only five years ago, it's nice to have a look back at the earlier time that the comics now ignore. This title is set in 1957, when a down-to-earth vigilante investigates this impossible creature called Superman. After some initial scuffles, the two become allies in a battle against Lex Luthor and a rogue Soviet general. Writer Kevin Anderson misses the time line, introducing Senator Joe McCarthy in 1957, months after his death, and includes some scientific gadgets that were way ahead of their time, but the full cast of performers makes the action exciting enough that one doesn't care. Though background music and sound effects can be a bit overwhelming, overall Batman and Superman have never sounded better. M.S. © AudioFile 2013, Portland, Maine [Published: AUGUST 2013]