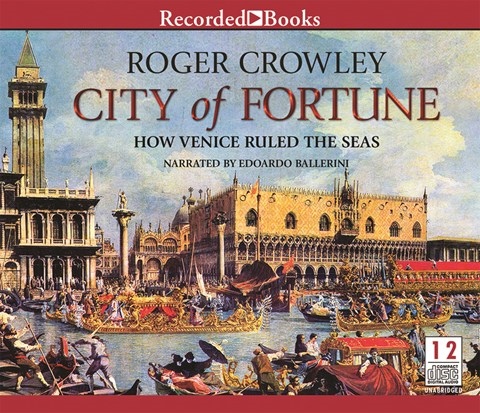 CITY OF FORTUNE How Venice Ruled the Seas

Author Roger Crowley (EMPIRES OF THE SEA, THE SIEGE OF MALTA) undertakes the massive task of charting the history of Venice from 1000 to 1500 C.E. He examines aspects of trade, the Crusades, and the cultural advances that made the “lagoon dwellers” a dominant force in Europe. Edoardo Ballerini’s narrative skill adds the human element to Crowley’s well-researched history. Thanks to Ballerini’s performance, the listener feels the early Venetians’ longing for power. With little land available for agriculture, they were forced to resort to the sea for trade. Recounting details of the Crusades, violent sea battles, political maneuvering, and religious disputes, as well as the 1204 sacking of Constantinople, which led to the Ottoman-Venetian War, Ballerini gives a passionate reading that keeps interest high. S.J.H. © AudioFile 2013, Portland, Maine [Published: JULY 2013]