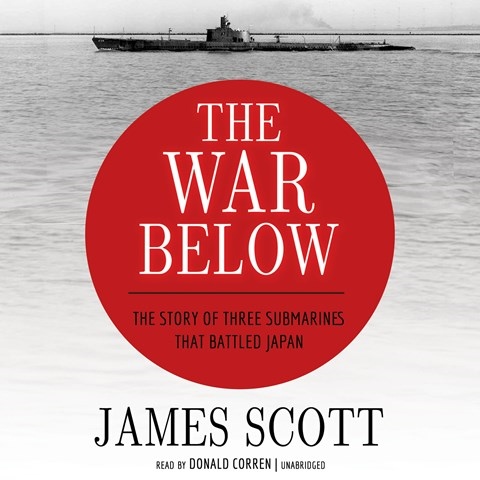 THE WAR BELOW The Story of Three Submarines That Battled Japan

Scott tells the stories of three U.S. submarines that were especially active in WWII. His work includes portraits of many of the individuals aboard, and to an extent covers the Pacific naval war in general. Donald Corren’s voice is unassuming, likable, and adaptable. His tone is quiet, his manner careful and solicitous, conveying the seriousness of the subject and respect for the danger and suffering involved. He strikes an excellent balance between the objectivity of the historian whose work he reads and involvement in the lives of the men he portrays. He does justice to the action scenes—and there are many, though they tend to be repetitive—as war itself is repetitive. Overall, Corren provides a clear, engaging, understated delivery of an interesting, and at times exciting, narrative. W.M. © AudioFile 2013, Portland, Maine [Published: AUGUST 2013]