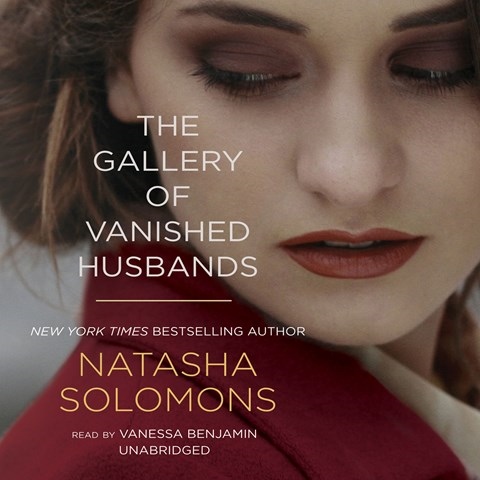 THE GALLERY OF VANISHED HUSBANDS

The audiobook opens on 1958 London with Juliet Montague; her son, Leonard, and daughter, Frieda; her parents—who are always called “the Greenes”—and other characters in her close-knit Orthodox Jewish community. Juliet’s life is complicated because she’s an “aguna,” or chained wife, a woman who cannot remarry until her “vanished husband,” George, is either declared dead or gives her a religious divorce. Vanessa Benjamin slowly and emphatically narrates Juliet’s story as she reignites her love of art, becomes an art gallery curator, and explores the world outside her home. Benjamin uses soft accents and subdued emotion to bring Juliet’s appreciation of art and her portraits to life for listeners. As her parents search for George so he’ll free their daughter, Juliet flourishes despite the invisible chains that bind her. M.B.K. © AudioFile 2013, Portland, Maine [Published: DECEMBER 2013]