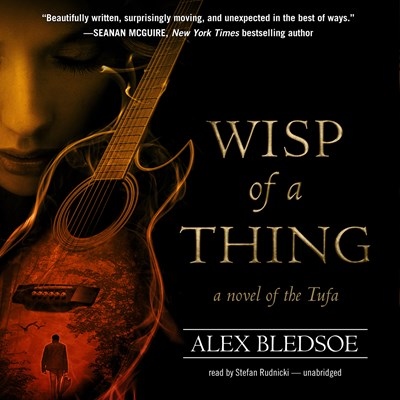 WISP OF A THING A Novel of the Tufa, Book 2

A famous musician recovering from a recent tragedy seeks solace and anonymity in Appalachia. He finds himself embroiled in local trouble of a very strange sort, for there is magic as well as music in this part of the country. The story is atmospheric, with detailed descriptions of the land and wildlife and plants. Narrator Stefan Rudnicki creates gentle Appalachian accents for the characters without anything showy in his performance. His deep voice magically transforms into soft, feminine tones for the female characters. There are many songs in this book, and rather than sing them, Rudnicki speaks them in a soft cadence, almost as though he’s reciting poetry. It is an effective, gentle performance. G.D. 2014 Audies Finalist © AudioFile 2013, Portland, Maine [Published: OCTOBER 2013]