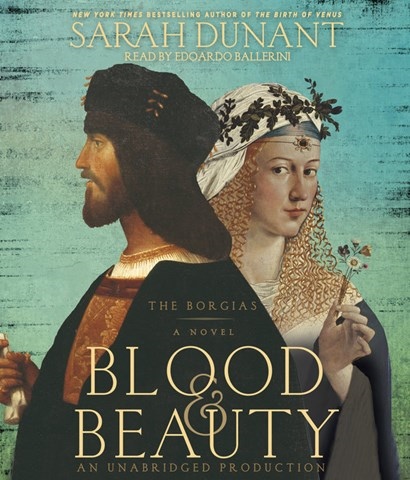 BLOOD & BEAUTY The Borgias; A Novel

This historical novel about Pope Alexander VI (Rodrigo Borgia) is filled with the pomp, intrigue, and corruption that marked his tenure. Also prominent are his two eldest children, Cesare and Lucrezia. Edoardo Ballerini offers an inviting reading. He uses an Italian accent for direct quotations, which effectively sets them off from the rest of the text and adds a bit of aural atmosphere. During the narrative passages, Ballerini occasionally lowers his voice to a near whisper, which makes listening a bit difficult and makes the listener wonder if the passages have special meaning, which they usually don't. But overall, his voice fits the material well. The author's over-the-top use of descriptive language fits audio better than the printed page. R.C.G. © AudioFile 2013, Portland, Maine [Published: AUGUST 2013]