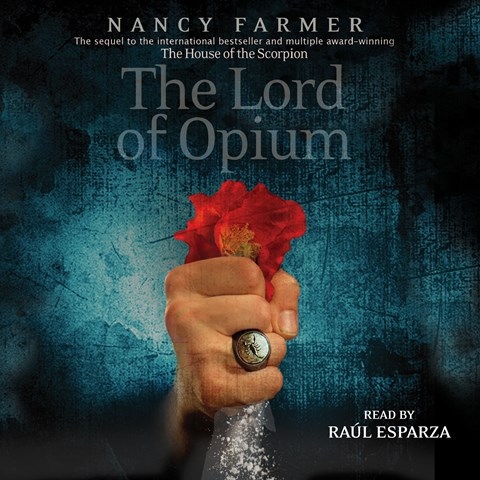 THE LORD OF OPIUM

Narrator Raúl Esparza performs this sequel to HOUSE OF THE SCORPION. He gives life to the story of Matt, a clone in an imagined near future. Here, Matt’s “original,” a powerful drug lord, has died, and the teenaged Matt has inherited his empire. Esparza moves fluidly between English and Spanish, as Matt does, and he creates distinct, appropriately accented voices for the multicultural cast of characters who help and oppose Matt as he tries to change his country from a slave economy based on the production of opium to one filled with free people producing crops and goods that sustain life. Ethical dilemmas, action, science, and even romance combine for riveting listening. A.F. © AudioFile 2013, Portland, Maine [Published: DECEMBER 2013]