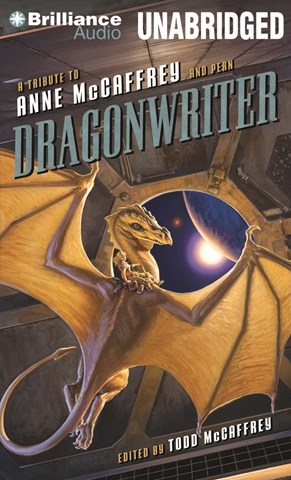 DRAGONWRITER A Tribute to Anne McCaffrey and Pern

Not only was Anne McCaffrey (1926-2011) one of the twentieth century’s best known and most successful science fiction authors with her the Dragonriders of Pern series, she had a huge personal influence on the generations of authors and exceptionally loyal fans who followed in her wake. In this multifaceted biography, the remembrances of writers such as Mercedes Lackey, Elizabeth Moon, Lois McMaster Bujold, and David Brin are read with careful professionalism. In addition, insightful and emotional tributes written and narrated by friends and family, such as singer-songwriter Janis Ian and McCaffrey’s daughter, Georgeanne Kennedy, pull on the heartstrings. McCaffrey led a remarkable life, emigrating to Ireland in 1971, where she raised horses and, of course, poured her knowledge of folklore, classic literature, and opera into her work. Perfect for giving voice to dragons. B.P. © AudioFile 2013, Portland, Maine [Published: SEPTEMBER 2013]