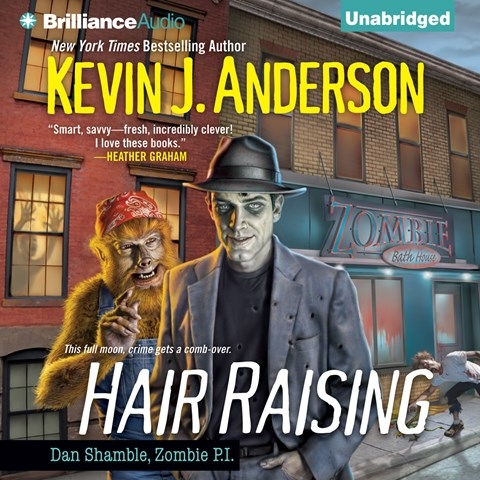 More than half the fun of Anderson’s latest novel featuring Dan "Shamble," zombie P.I., is listening to performer Phil Gigante wrap his mouth around an assortment of werewolves, ghosts, witches, vampires, and other things that go bump in the night. It's one thing to sound like a drooling, growling vampire, but Gigante manages to sound like a half-dozen, each with a distinct personality. Make no mistake, this novel is a parody, but one that never resorts to cliché—except to blow it away. Zombie detective Dan Chambeaux (pronounced “Shamble”) juggles multiple cases, including those of a harpy waitress (with a wonderful screechy voice) who has lost a bad-luck charm, Mafia zombies who run a “chop shop” for bodies, and werewolves who are on the verge of war. M.S. © AudioFile 2013, Portland, Maine [Published: NOVEMBER 2013]