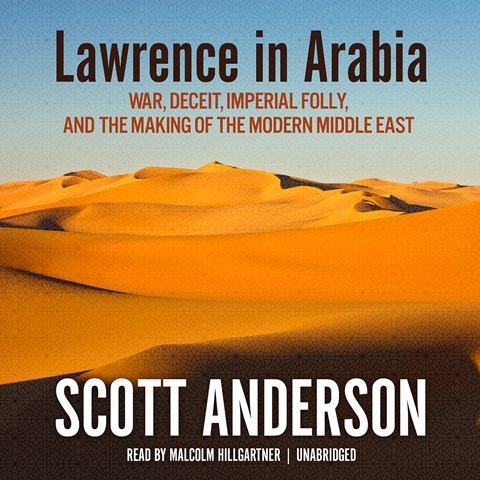 LAWRENCE IN ARABIA War, Deceit, Imperial Folly, and the Making of the Modern Middle East

This audio biography of the great and enigmatic T.E. Lawrence is actually the entwined biography of four men: William Yale (American oilman and adventurer), Aaron Aaronsohn (Romanian/Palestinian agronomist and Zionist), Curt Prufer (German spymaster and linguist), and Lawrence (British officer, archaeologist, author, and force behind the Arab Rebellion). Malcolm Hillgartner’s gravelly baritone conveys the muscular energy of Anderson’s prose. While the performance may be dramatic, it’s never boring. Although the story of Lawrence and his exploits provides the core of the narrative, the lives of the other three main characters intersect with his again and again from 1914 to 1919. Hillgartner’s narration is clear and easy to follow. He does a good job with the story's many Arab and Turkish names. F.C. © AudioFile 2013, Portland, Maine [Published: NOVEMBER 2013]