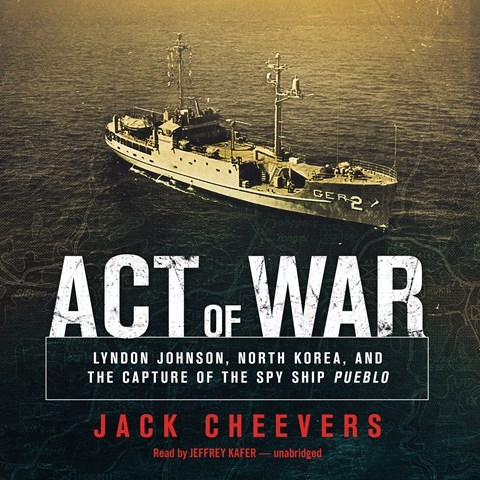 ACT OF WAR Lyndon Johnson, North Korea, and the Capture of the Spy Ship Pueblo

Narrator Jeffrey Kafer take listeners back to the Cold War and the soldiers and sailors who were drawn into it. This is the story of the crew of the U.S.S. Pueblo, a spy ship sent to the edges of North Korea in 1968. Inept planning by the Navy made its capture a major problem for the U.S., as top-secret equipment and codebooks were compromised. Portraying the ship’s crew, Kafer sounds young and clipped, as if he’s about to shout "Yes, SIR!" His matter-of-fact descriptions of how Captain Bucher and his men were treated are often painful to hear. D.R.W © AudioFile 2014, Portland, Maine [Published: JUNE 2014]