Home»Reviews»THIS LAND THAT I LOVE 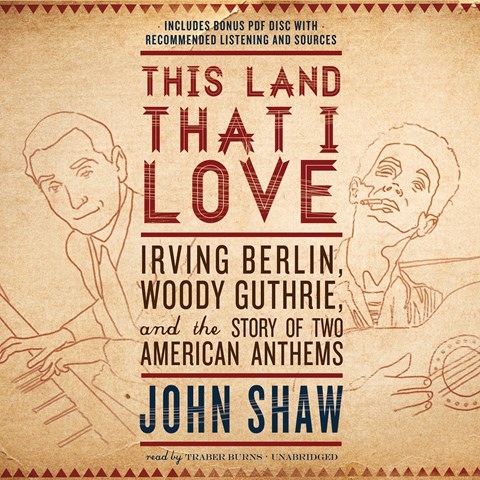 THIS LAND THAT I LOVE Irving Berlin, Woody Guthrie, and the Story of Two American Anthems

John Shaw analyzes the songs “God Bless America" and "This Land Is Your Land" and the men who wrote them, Irving Berlin and Woody Guthrie. Occasionally, Traber Burns's reading of the lyrics of these familiar songs sounds a little bit odd; they should be sung, after all. There's also some discomforting dialect, since Berlin used racial and ethnic themes in songs earlier in his career. Still, this is an engaging reading, with particularly good voice work on historical figures like Teddy Roosevelt. It brings listeners into the world that Berlin and Guthrie worked in. With the additional examination of the earlier "Yankee Doodle," listeners get a good look at the American psyche through music. J.A.S. © AudioFile 2014, Portland, Maine [Published: FEBRUARY 2014]